St Magnus narrowly escaped destruction in 1633. A later edition of Stow’s Survey records that “On the 13th day of February, between eleven and twelve at night, there happened in the house of one Briggs, a Needle-maker near St Magnus Church, at the North end of the Bridge, by the carelessness of a Maid-Servant setting a tub of hot sea-coal ashes under a pair of stairs, a sad and lamentable fire, which consumed all the buildings before eight of the clock the next morning, from the North end of the Bridge to the first vacancy on both sides, containing forty-two houses; water then being very scarce, the Thames being almost frozen over.” Susannah Chambers “by her last will & testament bearing date 28th December 1640 gave the sum of Twenty-two shillings and Sixpence Yearly for a Sermon to be preached on the 12th day of February in every Year within the Church of Saint Magnus in commemoration of God’s merciful preservation of the said Church of Saint Magnus from Ruin, by the late and terrible Fire on London Bridge. Likewise Annually to the Poor the sum of 17/6. “The tradition of a “Fire Sermon” was revived on 12 February 2004, when the first preacher was the Rt Revd and Rt Hon Richard Chartres, Bishop of London.

The church and the chapel

Parliamentarian rule and the more Protestant ethos of the 1640s led to the removal or destruction of “superstitious” and “idolatrous” images and fittings. Glass painters such as Baptista Sutton, who had previously installed “Laudian innovations”, found new employment by repairing and replacing these to meet increasingly strict Protestant standards. In January 1642 Sutton replaced 93 feet of glass at St Magnus and in June 1644 he was called back to take down the “painted imagery glass” and replace it. In June 1641 “rail riots” broke out at a number of churches. This was a time of high tension following the trial and execution of the Earl of Strafford and rumours of army and popish plots were rife. The Protestation Oath, with its pledge to defend the true religion “against all Popery and popish innovation”, triggered demands from parishioners for the removal of the rails as popish innovations which the Protestation had bound them to reform. The minister arranged a meeting between those for and against the pulling down of the rails, but was unsuccessful in reaching a compromise and it was feared that they would be demolished by force. However, in 1663 the parish resumed Laudian practice and re-erected rails around its communion table.

Joseph Caryl was incumbent from 1645 until his ejection in 1662. In 1663 he was reportedly living near London Bridge and preaching to an Independent congregation that met at various places in the City.

During the Great Plague of 1665, the City authorities ordered fires to be kept burning night and day, in the hope that the air would be cleansed. Daniel Defoe’s semi-fictictional, but highly realistic, work A Journal of the Plague Year records that one of these was “just by St Magnus Church”. 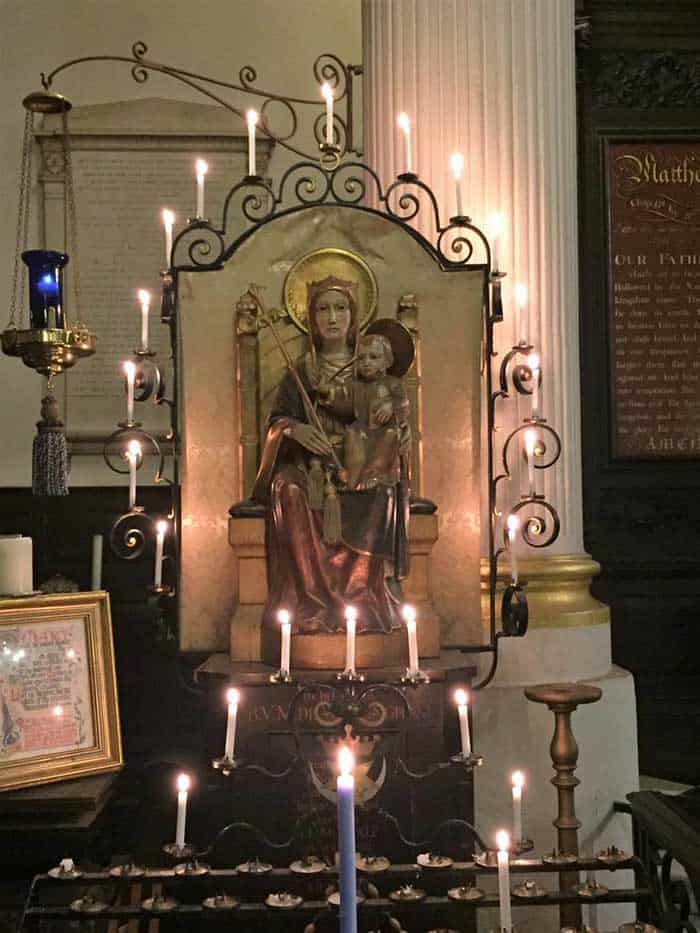 Previous: 15th and 16th century
next: Great Fire of London