A NEW COMMEMORATIVE RECORDING OF THE MUSIC OF the late WILLIAM PETTER:

Payment may be made by direct to St Magnus bank account.

Please use “CD” followed by your surname as the code/reference and email us through the website to say you have done so,

together with the name and full postal address to which they should be sent. Thank you.

There are still a limited number of the ‘Regina Coeli’ CD available for the same prices. Please be clear in your email or letter if you would like any of these.

The Choir at St Magnus (left to right)

Photo to be updated with William Johnston Smith, as Bradley Smith has now left the St Magnus Singers to pursue his own opera career.

Former singers/soloists who feature on our CD's and /or have held prominent positions:

After studying music as a Choral Scholar at St John's College, Cambridge, Bradley went on to train at the Royal Academy of Music where he was a prize- winning finalist in the Joan Chissel Prize for Schumann Lieder, winner of the Blythe-Buesst Aria Prize, and winner of the Tom Hammond Opera Prize.

Concert performances include Britten's Serenade for Tenor and Horn, Schumann's Liederkreis Op.39, Faure's La bonne chanson at King's Place, soloist in Bach's ChristmasOratorio at St John's Smith Square, soloist in the Bach Passions with the Hanover Band and Ex Cathedra, a reciital of Schubert Lieder at St Martin-in-the-Fields and soloist in a concert of the music of Henry Purcell at the Cadogan Hall.

Following success at the International Singing Competition for Baroque Opera Pietro Antonio Cesti, Bradley performed the role of Lelio in Cesti's Le nozze in sogno as part of the Innsbruck Festival of Early Music with performances at the Salzburg Mozarteum.

Future highlights include the role of Oduardo in Handel's Ariodante in Vienna, Hamburg and Paris, and the role of Albert in Britten's Albert Herring, at the Buxton Festival.

Bradley has now found it necessary to leave us as principal Tenor in order to pursue his career in opera. He has been succeeded by William Johnston Davies, details of whom can be found above. 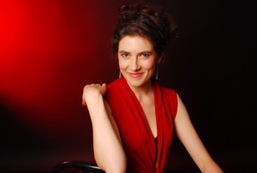 Marie Degodet (Mezzo-Soprano)
After singing as a child at the Dijon cathedral, Marie specialised in Gregorian chant and the French Baroque repertoire for 12 years, performing in France’s major venues. Concomitantly, Marie trained at the Guildhall School and then at the ENO. In the operatic repertoire, she actually am a young dramatic soprano but currently sings the Zwischenfach mezzo parts and enjoys being an alto in consorts. She looks forward to singing more opera in Europe in the months to come, and hopefully one day in Bayreuth! She grew up in Burgundy, but her love of Great Britain, its culture and people, has kept her happy in London for the past 12 years.

Marie features as the mezzo-soprano on the choir's second CD, Inexplicable Splendour.

John read Music at Magdalen College, Oxford, where he sang in the choir and studied singing with Peter Harvey and Ashley Stafford. In Oxford he sang the roles of the Commendatore in Don Giovanni, Bartolo in Le nozze di Figaro, and David in A Hand of Bridge. He also gave a number of recitals in venues across Oxford including the Holywell Music Room. Prior to his undergraduate degrees, he held a choral scholarship at St Martin-in-the-Fields, and sang at the National Theatre. John now combines his freelance singing work in a number of different choirs with work as a conductor. He is one of the founding members of the opera and music theatre production company Dioneo whose first production in 2011, Victor Ullmann’s The Emperor of Atlantis, was given at the Arcola Theatre for performances as part of the Grimeborn Festival to critical praise.
Whenever John returns to the UK, he returns to St Magnus to sing at special services or events.
http://www.johnmurton.com/yspjxjlecmmiq1olzr38kprkgv36ep